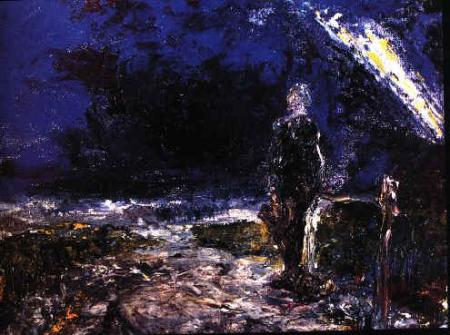 ReclaimtheSea
High-Water Diving
Dun Laoghaire
Bailey Lighthouse
Howth
Albert Camus-La Peste
Current Ocean Temperature
Forum
[email protected]
Jack B Yeats painting, The Sea and the Lighthouse
"On peut seulement regretter qu'elle se soit construite en tournant le dos a cette baie et que, partant, il soit impossible d'apercevoir la mer qi'il faut toujours aller chercher." La Peste - A. Camus
Our country, Eire, fits into a rectangle of about 440 km. by 344 km. in the North Atlantic between latitudes 51.30 and 55.30 north of the equator and longitudes 5.30 and 10.30 west of Paris (or Greenwich after Waterloo) ; it is in close contact with the sea all around because of its extreemly rugged coastline of well over 2,500 km. estimated as the crow or seagull flies across the narrower coves and bays. No one lives farther than 100 Km. from the sea but it is getting harder and harder for people to reach it because of the many 'exclusive' developments, whose main gain is the exclusion of the general public, being built on the sea-front. The sea is the most valuable resource given to us by Nature and it is important that every resident of the country should be able to gain access to its health and healing properties at a place near where they live without having to travel extra distances or pay fees to enter. It is the purpose of this undertaking to highlight the beauties of the sea and to alert people as to the insidious privatisation of the sea-shore and destruction of traditional bathing areas especially those facilities which local authorities have failed to maintain.
The local authorities are often either unable or unwilling to fight for the peoples' rights to the sea and sometimes act more like racketeering landlords than ever did the infamous 'captain Boycotts' of our penal times who displaced millions of people from the countryside and burned down their humble abodes so that they would not be troubled by 'trespasses' on their newly grabbed land. They,the local councils even allow public facilities built in hard Victorian times such as toilets,shelters even the thalassic baths at Clontarf, Blackrock and Dunlaoghaire, built to allow all to enjoy the bay, to fall into disuse, becoming eyesores, contrary to all planning regulations applied to private landlords.
Dublin bay is an estuary at the mouth of three sister rivers, the Tolka, the Liffey and the Dodder and it has an awesome coastline of about 26 km. from the Bailey at Howth head to the precipitous Vico of Killiney, everchanging from the cliffs off Howth to the sands of Dollymount, Clontarf and Sandymount back to the cliffs off Dalkey,which was once the the port of pirates and, reputedly, the home of massive burried treasure.
There was a time when it was thought to be very polluted by the discharge of raw sewerage and untreated waste matter directly into the sea and people tended to avoid swimming in it or eating any fish caught there ; it may be from that time that the public facilities were let go into rack and ruin but these unhygenic conditions are long since gone and the water is mainly crystal clear nowadays thanks to the modern treatment plants and the flushing out of the bay by the twice a day ebb and flow of the tides which change by over 3 metre.
The bay is basically an isosceles triangle of base 10km.between Howth and Dalkey and height 5km.to Irishtown, giving it a total surface area of about 25sq.km.; so it is flushed out twice a day by over 150,000,000 cubic metre of fresh sea water, enough to get rid of most of the dirt we can throw at it.
Nevertheless, it is important for us all to love
'the sea,oh the sea,is gra geal mo chroi,long may it roll between England and me, thank God we're surrounded by water'

and to raise awareness of its benefits for young and old and resist all attempts to privitize any part of our coastline or pollute the sea; and maybe, once again, Ireland might have Olympian swimmers and divers.

It is the duty of the local councils to reinvest some of the funds they gain directly and indirectly from sea trippers back into the seaside areas for the benefit of those visitors and provide facilities for bathers in our often inclement weather.