Writing about the romantic adventures of Leopold Bloom that great latter-day Homeric hero hailing from the southern side of Dublin Bay, where the author himself was born and raised, James Joyce attributes his hero's most erotic memories to his first love-making with his heroin, his Irish Molly Oh on Ben Howth which lies diametrically across the Dublin Bay from his home and wrote
'In what direction did listener and narrator lie?
Listener, S.E by E.;
Narrator, N.W. by W.: on the 53rd. parallelof latitude, N. and 6th. meridian of longitude, W.: at an angle of 45 degrees to the terestial equator.'

'Hidden under wild ferns on Howth. Below us bay sleeping sky.No sound. The sky. The bay purple by the Lion's Head. Green by Drumleck. Yellowgreen towards Sutton. Fields of undersea, the lines faint brown in grass, burried cities. Pillowed on my coat she had her hair, earwigs in the heather scrub my hand under her nape, you'll toss me all. O wonder! Coolsoft with ointments her hand touched me, caressed: her eyes upon me did not turn away. Ravished over her I lay, full lips full open, kissed her mouth. Yum. Softly she gave me in my mouth the seedcake warm and chewed. Mawkish pulp her mouth had mumbled sweet and sour with spittle. Joy: I ate it: joy. Young life, her lips that gave me pouting. Soft, warm, sticky gumjelly lips. Flowers her eyes were, take me willing eyes. Pebbles fell. She lay still. a goat . No-one. High on Ben Howth rhododendrons a nannygoat walked surefooted, dropping currants. Screened under ferns she laughted warmfolded. Wildly I lay on her, kissed her; eyes, her lips, her stretched neck, beating, woman's brests full in her blouse of nun's veiling, fat nipples upright. How I tongued her. She kissed me. I was kissed. All yieding she tossed my hair. Kissed, she kissed me.'-----------Ulysses------.James Joyce

*
Twiss wrote that the hill of Howth viewed from Stillorgan appeared exactly like that of Gibraltar; which may account for the fact that Molly thought she had said 'yes, yes...' to Leopold in those Mediterranean climes when she had, in fact, travelled no further from Eccles street than the Hill of Howth 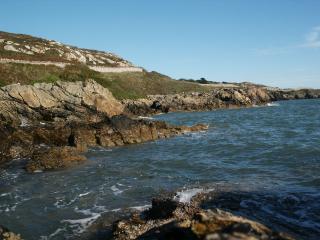 Hoath, a great high mountain, three or four miles compass in the botom, having the sea on all sides except the west side, where with a long narrow neck it is joined to land, which neck, being low ground , one may from either side see the sea over it; so that afar it seemeth as if it were an island. This head may be seen a great way off at sea, for even upon the land one may very perfectly see it, not only upon the key of Dublin,which is six miles from thence but nine or ten miles further westward.
Natural History of Ireland - Gerard Boate - 1652

Bailey Lighthouse
Perhaps, the biggest lighthouse in Ireland and its function is and has been for centuries to guard the northern entrance to Dublin bay from its high advantageous position on the hill of howth and to alert ships to the rocky and dangerous coastline below by night and under foggy conditions by day. The present structure was built in 1814 on Duncriffan promontory, which apparently up to that time bore clear remains of King Criffan's fortress from 2,000 years ago. It was here that the King had his palace and treasury.

Ptolemy , the second century A.D.Alexandrian seafarer, on his ancient map of Ireland marked a small island, which he called Edron Hermos, meaning the Desert of Edar, at the place which we now know as the Peninsula of Howth; in fact,joined to the mainland by a low narrow isthmus at Sutton cross unremarkable from far out at sea, for the Alexandrians dared not come too near the irish savage Picks.
Its high vantage point overlooking Dublin bay made it indispensable as a look-out post for defenders of this city and many battes were fought for its possession, including an assault by Sir John De Courcy and his fellow Normans in 1177. The Norman victors built the first lighthouse here to guide their fellow travellers away from the steep Needles and crags of the coastline.
The celtic chief Criffan is said to have had his fort at Duncriffan, Ben Edar around the time of Christ according to the Annals of the Four Masters and Aideen, the daughter of Aengus, who died of grief at the loss of her lover, Oscar, 300 years later is said to be burried under a large Cromlech here.

Howth head is a wonderful uncluttered nature friendly place to walk and swim in its beautiful coves such as atRedrock bay which, by the way, would be called Golden Rock because of the colour of the stones if it was anywhere but among the deprecating Dubliners; and at Balscadden bay strand if you are fit and bold enough to negotiate the dilapidated remaining steps and the builders rubble on the approach also an example of how little we Irish appreciate the wonderful sea all around us. It shows how this generation is willing 'to sell for one shilling' all the rights that were given to us by Nature and for whose use many people fought and died right down since the time of Edar the founder of Howth.

"Far away in the west the sun was setting and the last glow of all too fleeting day lingered lovingly on the sea and strand, on the proud promontary of dear old Howth, guarding , as always, the waters of the bay, on the weedgrown rocks along the Sandymount strand and last, but not least, on the the quiet church whence there streamed forth at times upon the stillness the voice of prayer to her who is her pure radiance a beacon over the storm tossed heart of man, Mary Star of the sea."
...........Ulysses........James Joyce

Howth settled for slumber, tired of long day, of yumyum rhododendons (he was old) and felt gladly the night breeze lift, and ruffle his ferns. He lay but opened a red eye unsleeping, deep and slowly breathing, slumberous but awake. And far on Kish bank the anchored lightship twinkled, inked at Mr. Bloom. _ _ _ Ulysses _ _ _ James Joyce